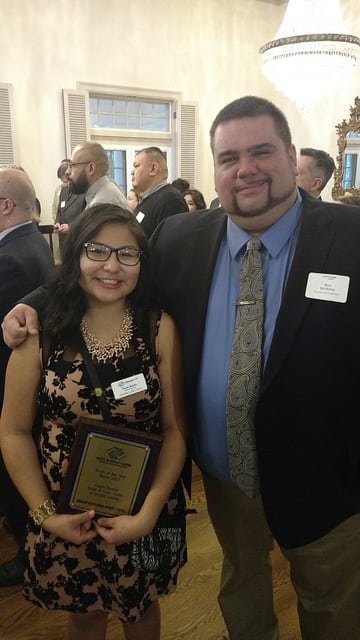 On March 20th, Boys & Girls Clubs of Skagit County’s 2017 Youth of the Year, Paula Banda traveled to Olympia with her advisor and Sedro-Woolley Club Teen Director, Patrick Dougher, along with other Club staff to participate in the Washington State Youth of the Year Program. Meeting up with the Youth of the Year candidates representing other Club organizations throughout the state, the weeklong program is focused on celebrating the incredible leaders that each candidate has become, and their personal journey to the competition. The Youth of the Year participants work closely together throughout the development process, sharing exclusive experiences, over the days in Seattle and Olympia. Reflecting on the her time spent on the trip, Paula remarked, “I loved how close I got with the other candidates. It felt like we’d all been friends for years.”

Paula and her new Youth of the Year friends attended a breakfast reception at the Governor’s mansion, where she spent time talking with Senator Kirk Pearson and Governor Jay Inslee. After a tour of the Capitol Building, the candidates traveled together to Seattle to prepare for the Youth of the Year competition, stopping at the Virginia Mason Athletic Center for the exclusive opportunity to meet renowned Bobby Wagner, of the Seahawks. The teens were also treated with a stop at Tumwater Family Fun Center for relaxation, before heading to the Space Needle where they practiced their speeches and brushed up on interview skills. A limo ride to Dick’s Drive-In for dinner rounded out an incredible day. “Overall, the Youth of the Year program is a rich experience for teen members, balanced with opportunities for growth and a lot of fun. The Washington State Boys & Girls Club Association really lays out the red carpet to make the participants feel special.” says CEO Ron McHenry.

Given the focus on Character & Leadership development throughout the entire Youth of the Year process, the remaining time spent in Seattle was focused on practicing speeches, and engaging in interviews. “I used to feel really shy about talking to professionals, but now I feel a lot more comfortable with it, because of the tips I learned at Youth of the Year,” Paula reflected. Judges of the whole competition come from state and regional industry leadership, community organizations, elected positions, and represent a wide snapshot of the collaboration that makes for thriving communities in Washington. The judges read all the applications and personal essays for each candidate, they listen to speeches, and they conduct panel interviews of the teens. The arduous process helps better prepare all the teens for post-high school plans, and gives them an introduction to a wide range of career paths available.

It was an inspiring night on March 23rd, with over 300 in attendance to hear each candidate’s speech at the Washington State Youth of the Year Dinner at the Bell Harbor Event Center in Seattle. Paula’s speech relayed her struggle with bullying and finding the right place to fit in. It was at the Club that she found that safe place to learn and grow. A child of immigrant parents, the scare of deportation of her family hit Paula at a young age, and it was through overcoming that obstacle, with the help of the Club, that she set her goals high for success.

Every youth’s speech was a testament to how the Boys & Girls Club played a pivotal role in their life. The stories were personal, some with great hardship, and some with an acceptance that hardship may come– but they had confidence and skills to stay focused on their goals and dreams.  Gee Scott, ESPN Announcer and Emcee, joked that after hearing about their goals for the future, he needed to “go home and re-evaluate his life.” Paula had full support from the Boys & Girls Clubs of Skagit County with many guests in attendance; her family, Club staff, and fellow Club members in the program, there to learn and gain from the experience. Director of Operations, Manny Smith remarked, “I know its not easy for these kids to get up and tell their personal story. It would be difficult for anyone. They meet these high expectations, and surprise us, and I think, even surprise themselves with what they are able to accomplish.”

Since being named Youth of the Year last January, Paula Banda has been very busy, speaking at various Civic and Club events, while maintaining her schoolwork, where she also participates in orchestra. In her 7 years as a Club member, Paula has been an eager participant in Club programs and is often volunteers at Club events and fundraisers to lend a hand. Paula now looks to her future. As a young Youth of the Year, she still has High School to look forward to. She plans to enroll in Running Start at Skagit Valley College, with the goal of reaching Harvard, and a degree in Immigration Law, with many in her community eager to support her in her endeavors.