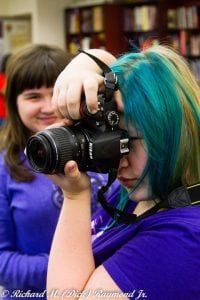 Richard Raymond started volunteering with Boys & Girls Clubs of Skagit County in early October this year. With the expansion of the Clubs into the Mount Baker & LaVenture middle schools, volunteer help is greatly appreciated and adds to the richness of the Club experience. Richard immediately began teaching photography at the Mount Baker Club. Fortunately, the Clubs had already purchased camera equipment through a grant from BestBuy. Because camera’s are Nikon DSLRs, it gives the members quite a range of control over their photos. Club members start out by learning the very basic workings of the cameras, then work on composition and choosing subject matter.

Mentored by well-known photographer, Lee Mann, Richard loves to share about his own experience of practicing photography out in nature. He reminisced about a day on the middle fork, Nooksack river, where he spotted an eagle on a low crag. He was able to sneak up fairly close, but eventually the great bird took flight. “When an eagle takes off to fly they drop at first because they are so large. The force of the wind from it’s wings took my hat off.” That was a great shot, but, he pointed out that if his wife, who was watching from afar, would have had a camera, she would have had the better photo. He then bought his wife a camera and now they enjoy the sport together.

Richard was recently awarded “Rookie Volunteer of the Year” at a Boys & Girls Clubs of Skagit County awards event. “I think he was so surprised by the award, but it is very well deserved,” says Tammy Findlay, the Club’s Director of Marketing & Stewardship. “I’m so impressed with how Richard leads youth. This program gives them a great sense of accomplishment. Club members are taking pride in their work, and striving to improve and learn. They are engaged and eager. Richard’s passion for photography is inspiring.”

Richard just finished up a class at the Mount Baker Club and is now teaching a new group at the LaVenture Club which will run for 8 weeks. Then he will be back at Mount Baker for an Advanced Photography session with 5 Club members from the original class. They will cover the inner workings of the camera more in-depth, and advanced settings, as well as new photography techniques.