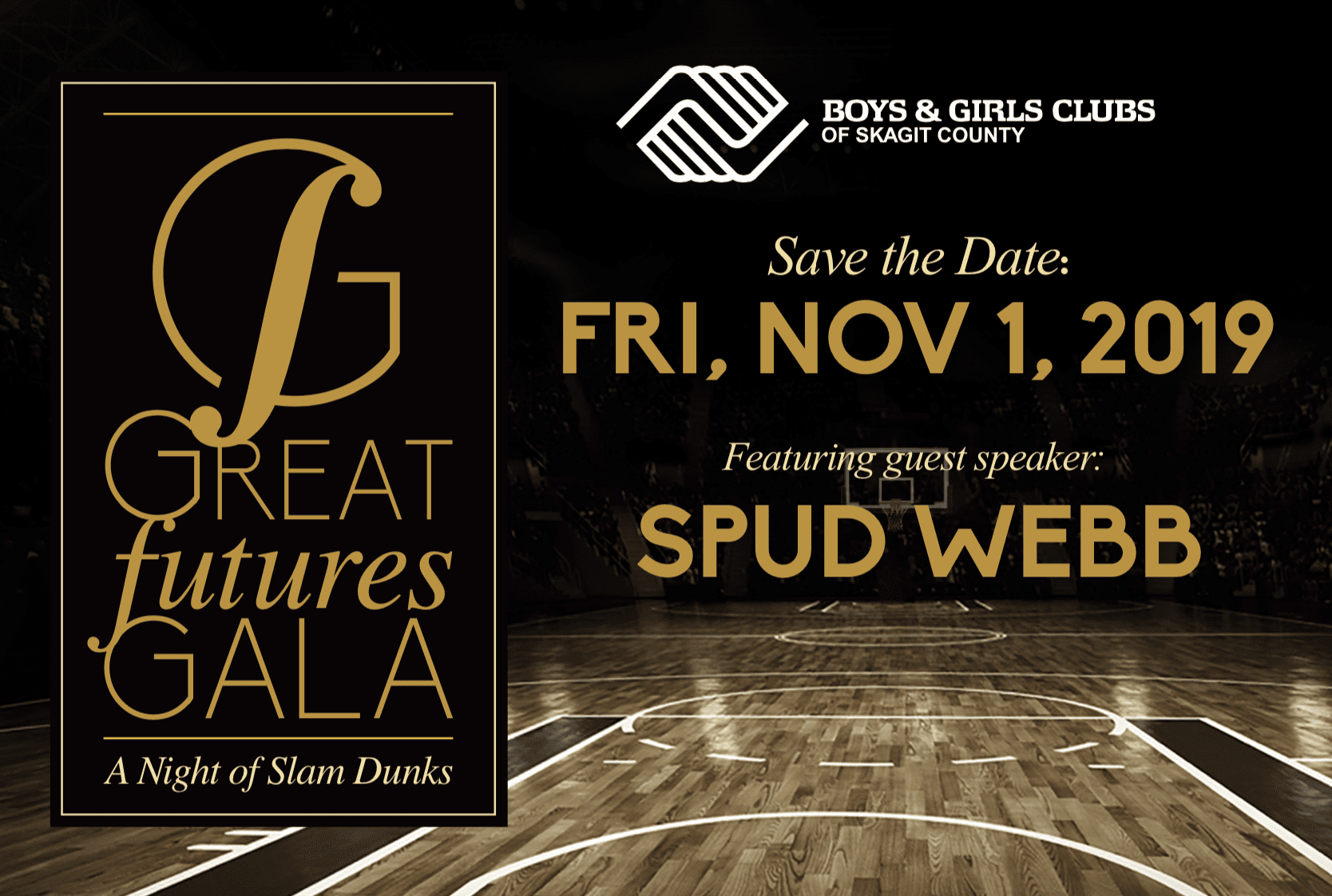 An event like no other, the 2019 Great Futures Gala is a fun night out in support of the mission of the Boys & Girls Club. This year we are thrilled to announce Slam Dunk Champion, Spud Webb, as our featured speaker for the evening. Come enjoy the games, silent auction, dinner, drinks, and for VIP sponsors, an exclusive photo op. Tickets and sponsorships are now available. Last year, the event sold out, even with expanded seating having been made available. Don’t miss out on your opportunity to have dinner with a legend! 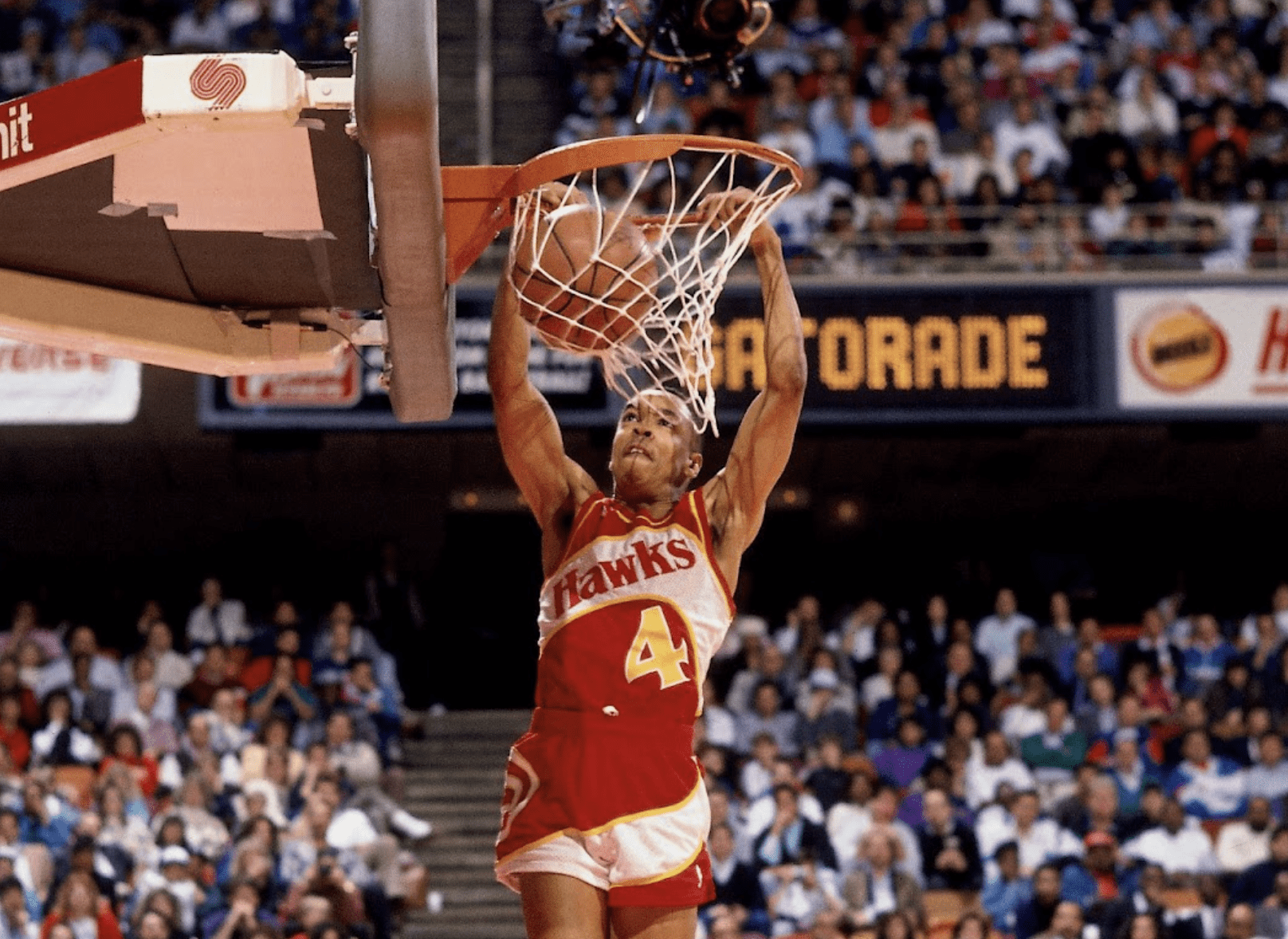 Anthony “Spud” Webb was born in Dallas, TX in 1963. Living in a small, three-bedroom home with his parents and five brothers and sisters, Webb began playing basketball at an early age and dreamed of being in the NBA. Although he was much smaller, he could always jump higher than the bigger kids.

One day after trying countless times to dunk, the skinny teenager grabbed a basketball and started running towards the basket. He soared into the air, cleared the ground by more than four feet and dunked the basketball through the hoop with two hands. Those who witnessed Spud’s dunk that day realized that he was a special basketball player.

Spud tried out for his junior high school team, however, he was told to sit in the stands because he was too small. It wouldn’t be the last time that he was denied a chance to succeed because of his height. One day Spud finally convinced his coach to let him play and he scored 20 points in his first game.

In high school, Spud tried out for the Wilmer-Hutchins High School Varsity team, but was told to play on the junior varsity team because he was too small. He was so disappointed that he even thought about quitting, but instead practiced even harder. When Spud was finally given the opportunity to play, he led his team to the playoffs.

Spud had a stellar high school career averaging 26 points a game. In his senior year, he was named Player of the Year and was also selected, as one of 10 players out of 5,000, to the All-State team. Despite his incredible high school accomplishments, Spud was not heavily recruited by Division I-A colleges because of his size. He refused to give up and decided to play at Midland Junior College where he led his team to the junior college national title in 1982.

In 1983, North Carolina State assistant coach Tom Abatemarco watched Spud play at his junior college in Texas. He suggested to late N.C. State head coach, Jim Valvano, that Webb visit the campus on a recruiting trip. As the story goes, the two coaches went to the airport to meet him. When a little guy came walking towards the coaches, Valvano supposedly said to Abatemarco, “If that’s Spud Webb you’re fired.” During the visit, Valvano was so impressed with Spud that he offered him a scholarship. Spud went on to lead the team to the Sweet 16 in the NCAA Tournament.

Once again, despite Spud’s incredible college career, he was not selected in the NBA draft because of his size. Refusing to give up on his lifelong dream, a disappointed Webb played in the United States Basketball League. Spud finally achieved his goal in 1985 when he was drafted in the fourth round by the Detroit Pistons. Just when he thought that he had overcome his final obstacle, Spud was cut by the team. However, he was given an opportunity to try out for the Atlanta Hawks and the rest was history. Teaming with Doc Rivers, Spud went on to average over 10 points, five assists a game, play in several playoff series and of course, win the slam-dunk championship at the 1986 All-Star game, beating out Dominique Wilkins and Michael Jordan.

Throughout his life, Spud faced challenges and obstacles, but with perseverance learned on the court of the Turnkey Boys Club at an early age, he prevailed. Spud is currently the President of Basketball Operations for The Texas Legends, an NBA Development League team.