Club members were able to visit the Seattle Art Museum this summer. Stefano Perruccio, the Clubs’ Art Specialist was one of the chaperones for the trip. Stefano spends time at each of the Clubs coming up with thoughtful art projects for the youth to participate in and he was especially excited about this opportunity. “The museum trip offered an exposure to a variety of art within many cultures all over the world, from modern, to traditional, to indigenous all in one space. I enjoyed witnessing their engagement and energy,” he said.

Tammy Findlay, Director of Marketing, was also able to make the trip and snap some photos. Of her experience on the trip, she said, “One of the first exhibits we viewed was a very large sculpture of an oversized black mouse sitting on top of a man lying in bed all in white. I asked one of the members if they had any thoughts on what it meant. They were confused by the question, but then had a very literal interpretation. ‘A big rat sat on him and he’s probably dead.’ I said I didn’t know what the sculpture meant, but that maybe the mouse represented something like anxiety. They said, ‘that’s weird!’ I continued asking members about details of various exhibits throughout, and soon members were coming up to me and sharing their interpretation of the art. I really enjoyed their thought process, and how they became more engaged when they realized that they were allowed to have an opinion about what they were viewing.”

In addition to admiring the works of art, kids were challenged to remain quiet, not touch the work and adhere to boundaries set by the museum. A difficult feat, to say the least, but they all did a masterful job overall. Stefano remarked that he wished museums were more accessible to a younger audience, more interactive, and not so “buttoned-up”.  This might have been one of the reasons that they loved the Three Empathics virtual display, part of the African art collection. The dark room featured neon-projecting, changing images on the wall and on the floor while playing calming music. Some of the youth mimicked the poses of the 3 seemingly meditating or yogic figures and let the images display on them as they lay on the floor.

Stefano followed up the experience with an art project. He explained, “After the trip, members created their own masks with paper mâché, exploring all the different styles of masks that we saw at the museum, Pacific Islander, Latin American, African American, and Native American. This brought the experience full-circle and provided hands-on learning that was more relatable for them, instead of the strictly academic viewpoint of the museum. This gave them the opportunity to be directly engaged, creating, instead of only viewing.”

Exposure to different types of artwork has shown to have an impact on kids learning and overall academic health. Visiting the museum, and providing Club kids with an “adult” perspective on art is just one more tool that helps the Clubs achieve one of their priority outcomes of Academic Success. 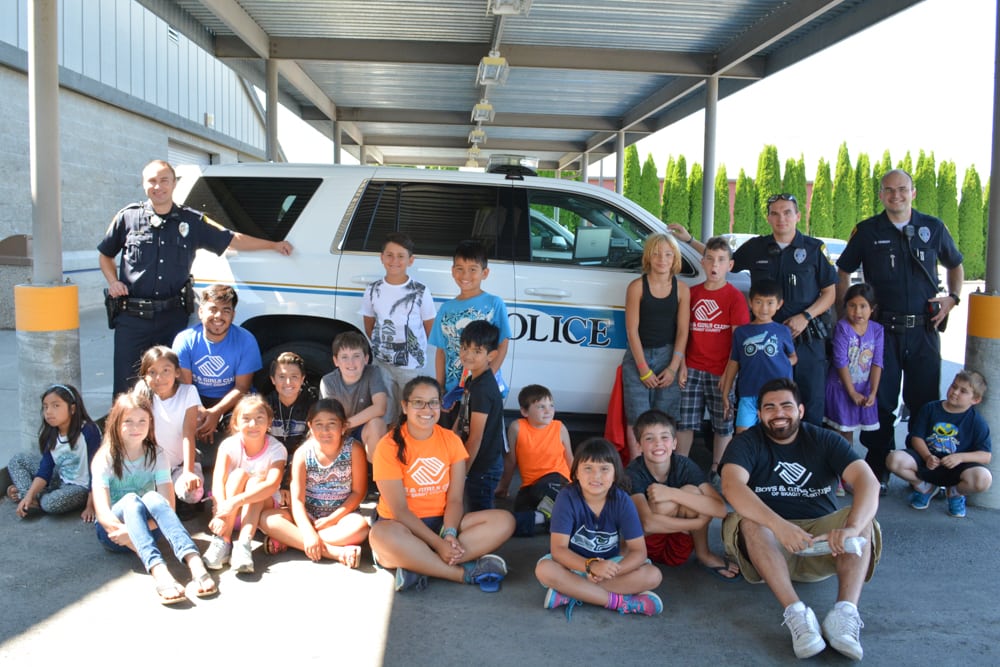 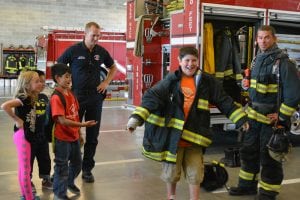 Club members enjoyed a walk to the the nearby Burlington Fire Station to learn about a day in the life of a firefighter and how they can improve on their fire safety knowledge. Burlington Fire & Safety Educator, Erica Littlewood and the group spent some time in the station’s learning center where they covered subjects such as, having a fire escape plan with your family, smoke alarms, and what to do if fire gets on you. This last interactive lesson was a favorite among the kids as Littlewood placed felt flames representing fire on a Club member volunteer, who then demonstrated her “Stop, Drop, and Roll” skills. Littlewood expressed that she was impressed with the their knowledge, saying “I appreciated this group’s thoughtful questions, comments, and answers to my questions.”

Next, youth visited the kitchen, where Firefighter Keith explained that firefighters cook and enjoy their meals together. Firefighter Brad quipped, “Not everyone here is allowed to cook.” Then youth went to the large garage where all the emergency vehicles and equipment is kept. Firefighter Eric dressed in full gear complete with an air tank, helmet and mask. “His voice voice sounds funny in there, doesn’t it,” said Firefighter Brad. “If there’s a fire and someone sounds like Darth Vader, that’s a firefighter coming to help.” Firefighter Keith explained that because of heavy smoke, a firefighter needs the air tank to breathe, and they will sometimes crawl on hands and knees to be able to see, and stay out of the thickest smoke. Kids were able to try on some of the protective equipment and discovered that it is very heavy and warm.

The visit concluded with an in-depth tour of the fire engine, and each youth got to try their skill on the fire hose. Firefighters rolled out a miniature barn with flames on top. Each Club member shot the hose, aiming to knock down the flames. The Boys & Girls Clubs of Skagit County is grateful to the Burlington Fire Department for all the service they provide the community, and for taking the time to educate and visit with our Club members.